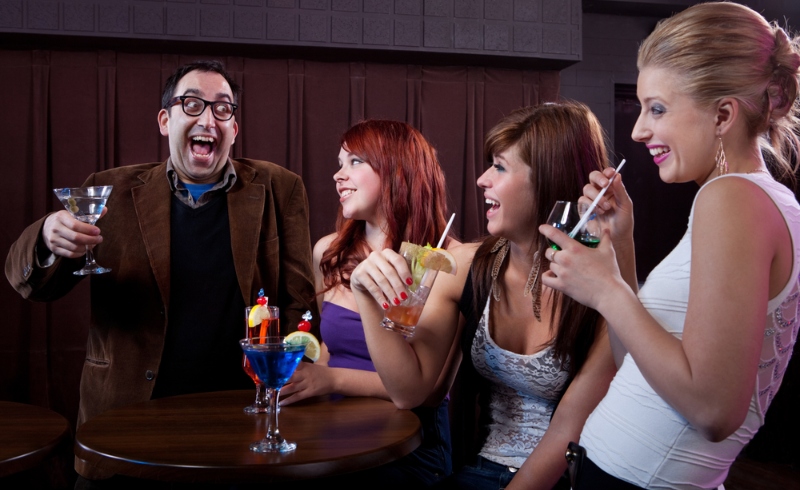 another woman on the spectrum who truly understands me and accepts me like no one ever has.

I’m blessed beyond what I could ever imagine.

But that’s not why you started reading this piece, is it? You didn’t want to hear how my life is so awesome right now. You were lured in by the promise of crazy dating stories and my life when I was actually raising a daughter and being a single dad. Well, here we go. These are a couple of highlights from the days of Sex and the Single Dad. Keep in mind that I started every post with a single line that summarized the post in a mosty-funny way.  Let’s start off with my first ever blog post.

Consider this to be Sex and the City on The Juice….

For years my friends, both male, and female have been advising me to write about some of my dating exploits. Word on the street is that I have some good stories as well as an interesting perspective on the dating world, as I have had full custody of a 12-year-old Drama Queen for 7 years now.

Not all stories I talked about were bad. Some were good. Some were very good. So good that they’re almost fairy tale-esque. But then the fairy starts smoking crack and soon enough, it’s back to dating reality.

As I told the stories to my friends, I made up names for the ladies in a very Seinfeldian way. Eventually, I had to start making the names a little more specific, since after a few “The Crazy One” stories I kept getting asked, “Is this the same crazy one as before or is this a new one?” So now I have stories about “The-one-who-invited-me-out-for-my-birthday-then stuck-me-with-a-really-huge-dinner-check”, The Yankee Fan”, and one of my all-time favorite names, “The Ashtray.”

So, my daughter picks up this woman for me at Barnes and Noble…

I think that it’s hilarious to listen to some single dads complain about their weekend with the kids. They get all dramatic about this and that and how they were so exhausted and couldn’t wait to get the kids back to their mother. It cracks me up. It really does.

In a way, I wish that I had their reality. I absolutely love my daughter and would not give up my full custody for anything, but truth be told, it would be nice to have the occasional weekend free from parental duties. I also love how these same dads try and push all the “parenting stuff” off on mom, while they do their best to be the fun parent.

Deal with reality, guys. You knocked her up, so you can do some of the heavy lifting yourself. Life isn’t all about Chuck E. Cheese and ski trips!

So there I was, at home one night, a full-time single dad fixing dinner after returning home from my 9.5-hour workday when my darling 12-year-old announces that she needs to get a book at the bookstore for this project that she has due. “OK,” I tell her. “When is it due?” “Tomorrow,” she replies very matter of factly. As I start to lecture her about responsibility and all that stuff, she looks at me, rolls her eyes and says, “what’s your problem?”

What’s my problem? Right now, I have a 4’11” redheaded problem! I quickly finish dinner and we jump in the car to head to our local Barnes and Noble.

We arrived at the bookstore and I found myself perusing the wares on a table when this blond woman across the table from me makes a comment about how much some book costs. I look up and said something back (I have no idea what I said. It was that memorable) and we chatted for all of 10 seconds before she walked away with her daughter.

I went and found my bundle of sunshine and we were in another aisle about 5 minutes later when she pointed out, “that lady you were talking to at the table just walked past us.” I glanced over at the lady and decided she was kind of cute, but I figured that the odds of me picking up a woman at a bookstore at 7:45 PM on a Tuesday night were about as good as the chance my daughter was gonna get an “A” on this project. So, I simply said, “Whatever.”

Long story short, my little bundle of joy started talking to the blond and steered her my way for further conversation and pretty much pimped me out to this woman, basically forcing me to ask her out and pushing us on a truly horrible date.

One friend volunteered to walk with her and that left me stuck with the other two—a pair of fairly unattractive former cougars who had the conversational skills of a cigarette butt.

Things have been slow of late. I’m way too busy working and trying to be a full-time parent to get out and date much. That sucks for me and it sucks for you, because the less I date, the less I blog and the less you are entertained by my stories. Tonight you are in for a treat boys and girls. I have a tale to tell you. It’s the tale of the German…

It was another crappy Saturday and I was working. The weather was blah and so was my mood for having to spend another weekend in the employ of The Man. Around two I got a text from some woman I had been chatting with online. She said she was going to be at a bar in Hamburg (25 min away) and did I want to meet her there for a drink?

I had no plans for the night, and I thought she seemed decent, so I accepted the invitation. I need to be honest with my readers right now and say that there are times I go on a date because I really want to and other times that I go on a date and think, “maybe this will go OK and if not, I will at least get a good blog post out of it.” This was one of the latter.

We decided on a place and time to meet and I found the joint, went inside and saw the German sitting at a table with three other ladies. #awesome

“O.K.,” I thought. “This will be interesting.” I introduced myself and we started chatting a bit. I found it kind of awkward since I was having a first date conversation with a table full of women; not one of them attractive enough to consider having a second date with.

After about 5 minutes, some appetizers were brought to the table. I was invited to join in the munching and I partook of some spinach artichoke dip and a few grilled pita triangles. It was pretty tasty. After we ate, the German got the leftovers in a to-go box.

We chatted a few minutes longer and she said that she was going to put the to-go box in her car since we were moving from a table in the restaurant to the crowded outside patio. One friend volunteered to walk with her and that left me stuck with the other two—each with the personality of a dying houseplant.

The minutes dragged on and the German was nowhere to be found. I texted her about 20 minutes later and asked where she was. Her response? “I think you’re a better match for my friend than me, [smiley face]”.

“Which friend?” I asked, “I came to meet you. Where are you?” I got no reply for nearly an hour. After 25 minutes of waiting around, I told the former cougars that I was heading home and wished them happy hunting. (I really did).

After arriving home, I chilled with Drama Queen a bit and soon received a text from the German. She said that she was sorry, but that she still thought I was a better match for her friend.

“What the [email protected]@@ made you think that?” I texted back. I felt like swearing and thought little of it, as I knew in my heart I was never going to hear from this one again (nor did I want to). It’s been 94 minutes since I sent that text and still nothing from her.

I could go on and on for days, telling you about how Heather Locklear has my underwear (she really does), and regale you with stories of the Blogger Hottie, The Nurse, The Diva, Phone Sex Operator, The Ashtray, The 36-Year-Old Virgin and so many more.

But I think you get the drift that dating as a single dad isn’t all that it’s cracked up to be. It’s not the stuff of movies and it’s definitely not what magazines like Maxim and Men’s Health make it out to be. Dating as a single dad can be cruel, it can be funny and it can leave you with some amazing stories, most of which I would have felt compelled to edit in a big way now that I’m older, wiser and not living in that moment.

What are your stories? Do you have any that rival mine? Can you top mine? Let us know by submitting yours to Good Men Project so that we can publish them. You’ll find all the info on how to submit your stories here.